This is one of those easy ones where you just mix and put in the provided tray and pop in the oven.

It comes with a plastic tray. Which would be fine in the microwave, but it said that I was supposed to cook it in that tray, in the oven! Plastic, in the oven?! I got too nervous to use it in the oven, so I used my own ovenware.

This had great flavor, but I would prepare it differently. The sauce didn’t really come together, nor was there enough of it. Also, the ravioli didn’t get cooked through, it was still pretty chewy.

I had ordered my Home Chef this particular week with 4 servings per meal instead of 2 because my husband is always still hungry after we eat our two servings. But instead of giving me double portions of everything, they just gave me two bags of each meal. So, I ended up making each meal twice instead of making the 4 servings.

Therefore, I had a choice to make it a different way. A few days later, I did it this way:

I used the instant pot, only because I was working in the bar kitchen and didn’t have a large pot down there and was too lazy to go upstairs and get one.

So, I heated the pot on sauté and added the sauce ingredients whisking to make the sure the cream cheese was really mixed into the sauce. I also added about ½ cup water since I wanted the pasta to cook all the way through.

After adding the ravioli, I set the Instant Pot on high for just 1 minute, but just as it came to pressure I got the dreaded “burn notice”! So I just let it bubble on sauté.

The pasta still didn’t get done enough, but the sauce was good. One of the raviolis stuck to the bottom of the pot and got destroyed, so it sort of became part of the sauce.

I don’t know if I’d get this again. It would be easy enough to make it again on my own if I had a good meat sauce. But it would probably be a lot better in the microwave.

Have you tried this one? What was your experience? 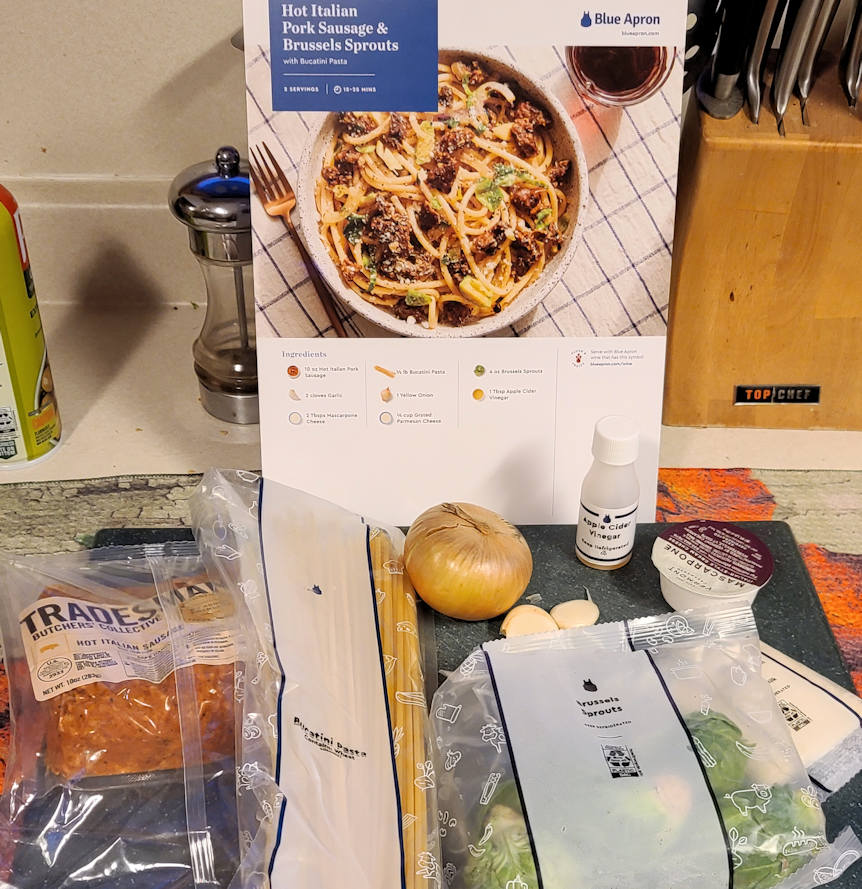 It was delicious! I forgot to add back in some of the pasta sauce and it did dry out, so I should have done that step. But the flavor was great. It was NOT hot at all however. So when remaking this one,  pick a really hot sausage. 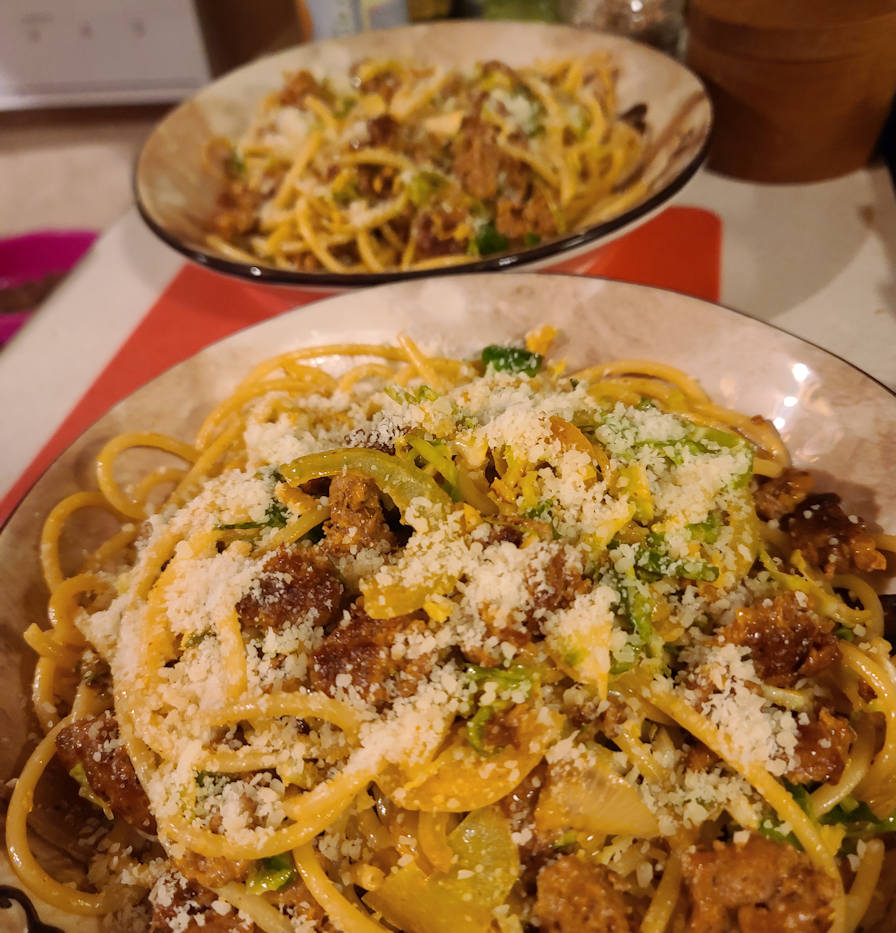 If you’re getting this from Blue Apron, add some chili flakes if you want spicy.

It was super easy and minimal clean up too. 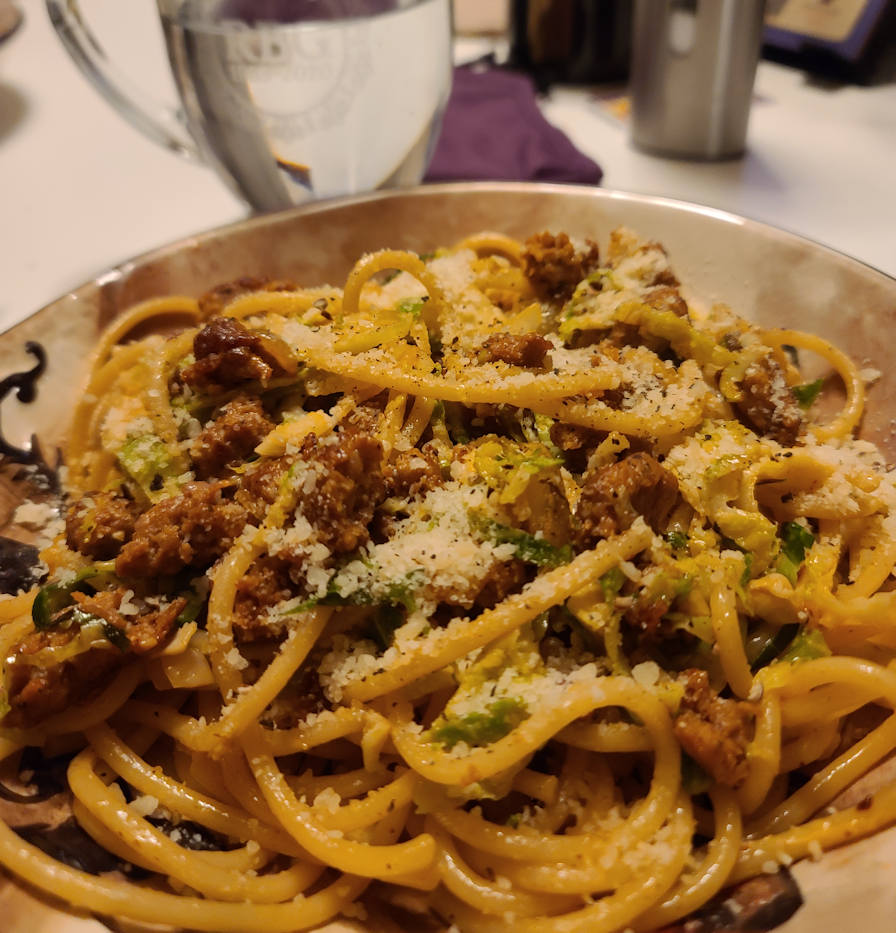 I made this Stovetop Mushroom Lasagna October 22, 2020. It’s from Bon Appetit, November 2020 issue. I saw the photos and was sold. Then a few days later I got both mushrooms and lasagna noodles from Imperfect Foods. So it was meant to be. 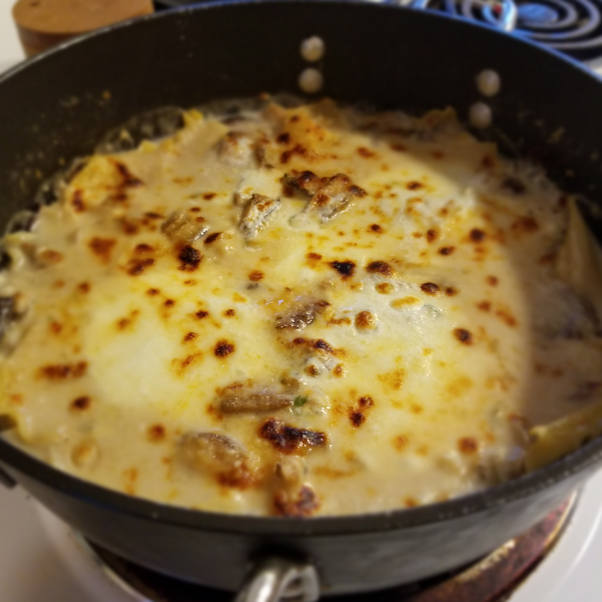 While I was making this I thought the 2+ cups of milk seemed like a lot, especially because it also called for water. I read the recipe several times because I could not believe that water was included. So I only used two cups milk then I added just enough water at the end, before simmering in order to submerge the noodles.

I noticed later that while the water was in the recipe directions, it is *not* in the list of ingredients. So I think this is an error.

Also, I didn’t have whole milk so I used unsweetened almond milk. Greg noticed and thought I’d added nutmeg! So eww, don’t do that! I thought it tasted OK but I’m sure it’s better with whole milk. Also that would have thickened it better.

In an attempt to thicken it, I added a bunch of shredded mozzarella before putting it in the oven to brown because what is lasagna if it doesn’t have CHEESE?!

I also added some umami seasoning to it at that time because it was bland.

The end result was delicious and I’d make it again for sure, but use whole milk and no water. I see everyone else on the BA site said it’s too soupy and bland too. But using less liquid and some extra seasonings make it really yummy! 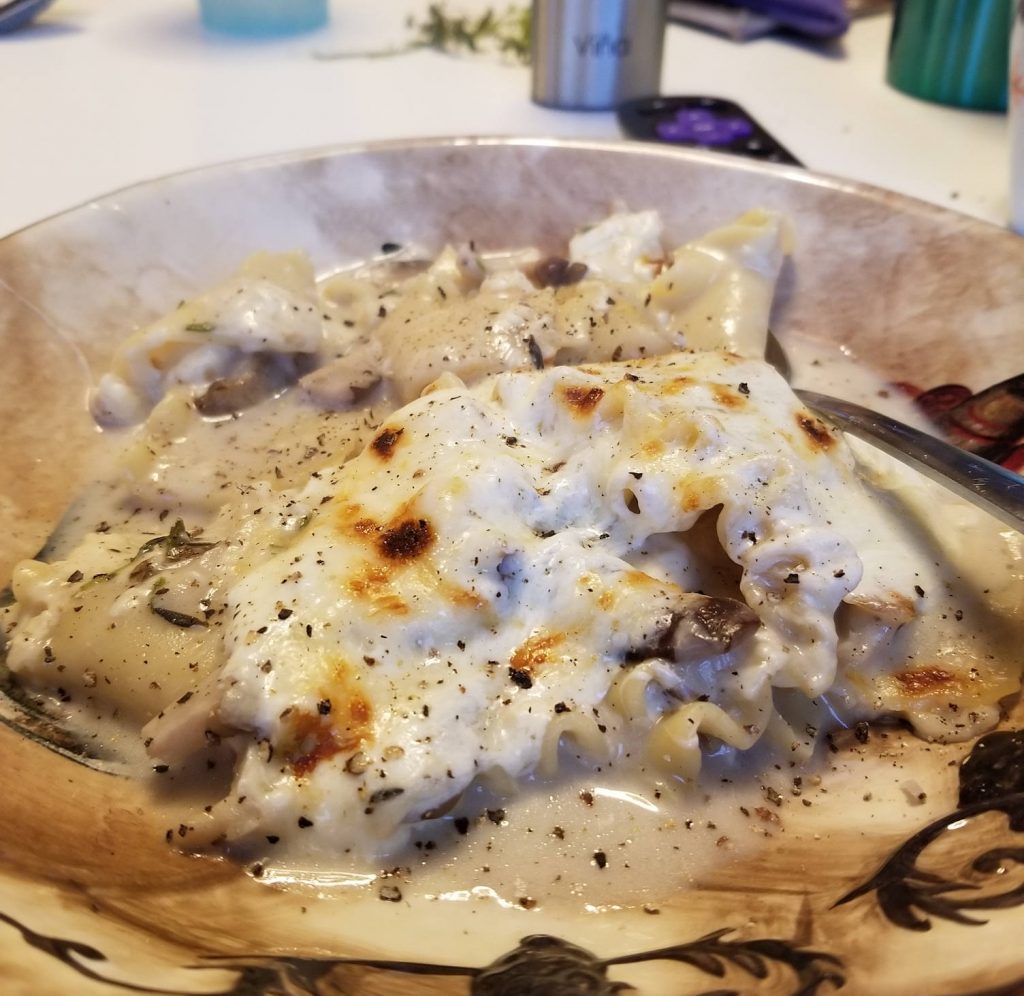 The lasagna noodles, mushrooms, almond milk were from Imperfect Foods. Click here to get $10 off your first box (and full disclosure, I get $10 too!)