So the one I chose from the February issue of Bon Appetit was the Broccoli Soup With Turmeric, Peanuts, and Crispy Shallots

I was taken by that beautiful photo! Kudos to the photographer and food stylists.

One of the “rules” of this project was that I really wanted to follow the recipe exactly and that I would not substitute any ingredients.

This is harder for me than I thought it would be. Not because I can’t follow directions, but because I just don’t always have everything on hand (or I don’t want to buy a bunch of something and waste the rest).

The first issue is that this recipe was for 4 servings and I was making this for myself (the husband doesn’t like soup or vegetarian dishes so this was a nope on both aspects).

So I scaled the recipe in half.

Then I realized I didn’t have serrano, but it did say “or other green chile” and I did have jalapeno so I used that and I think that’s acceptable.

I didn’t have a big Yukon gold potato and even if I did I probably wouldn’t use it because what am I doing to do with half a potato, since I’m halfing the recipe? So I used a bunch of small potatoes.

The only other change I made was that I didn’t have cilantro or mint for a garnish.

Here’s my set up: 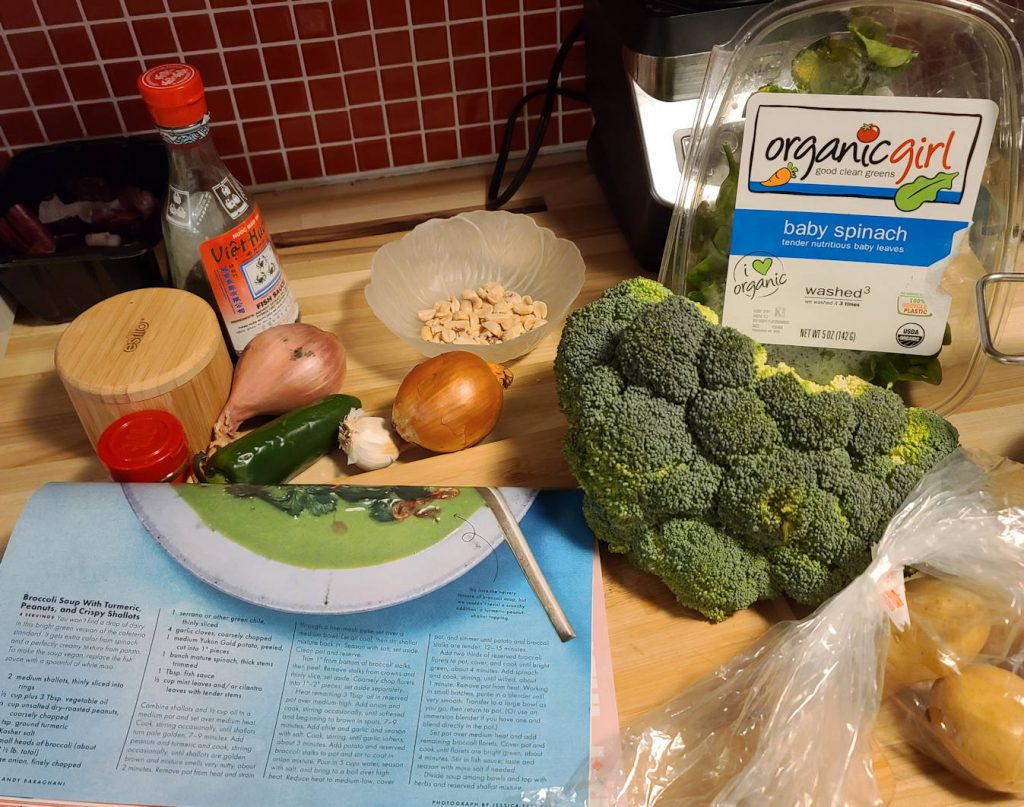 So the changes I made were really miniscule and I think would be allowed by the recipe author. Right? Please?

Oh and because I was making this in the bar kitchen, I didn’t have a large soup pot so I made it in the instant pot, but I didn’t pressure cook it. I just used it on Sauté Mode. 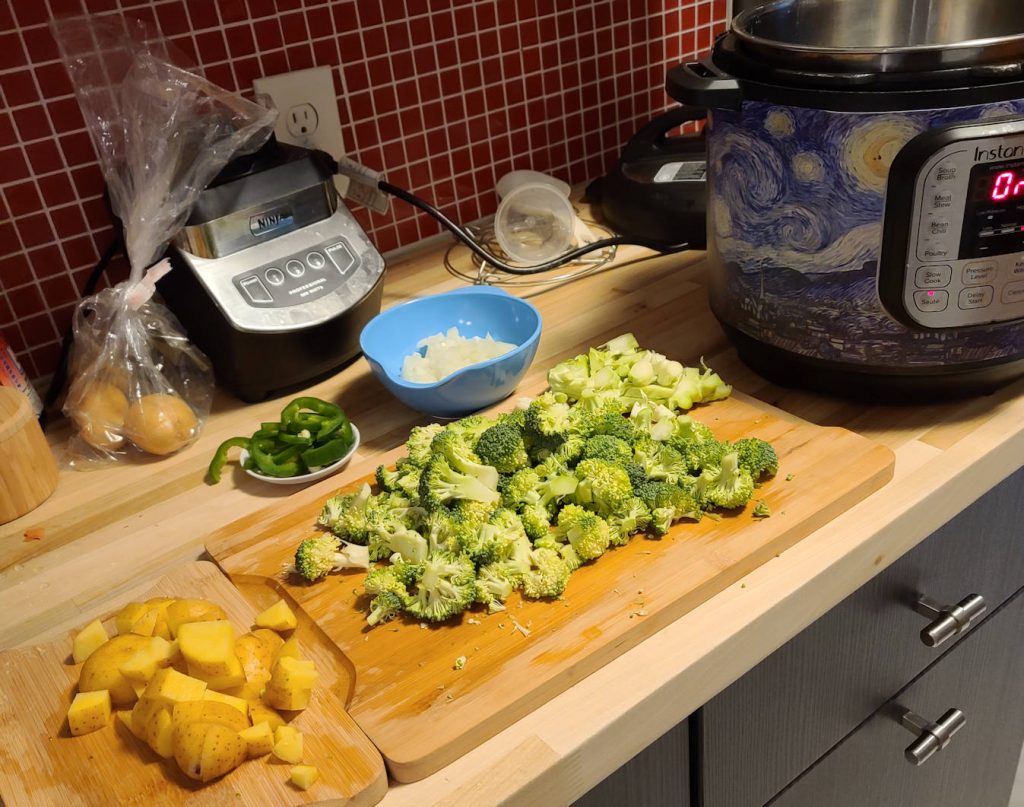 This was putzy to be sure, but pretty easy to make. It was sort of a lot of chopping, but I don’t mind chopping. As long as I have a good knife.

I used the immersion blender, right in the pot instead of a blender.

The part where I almost said “F this” and did it my own way was at the very beginning. The recipe says to cook the shallots, peanut and turmeric in the oil, separate them (drain the shallots and keep the oil). Then for reasons I can’t fathom, it says to mix them back together.

Well, that’s just ridiculous. So I compromised. I made the oil as told, then I separated them, but I kept them separate (don’t tell me how to live my life!) I’m glad I did. Because of that oil? It was amazing!! I would make that again and use it to drizzle over everything! 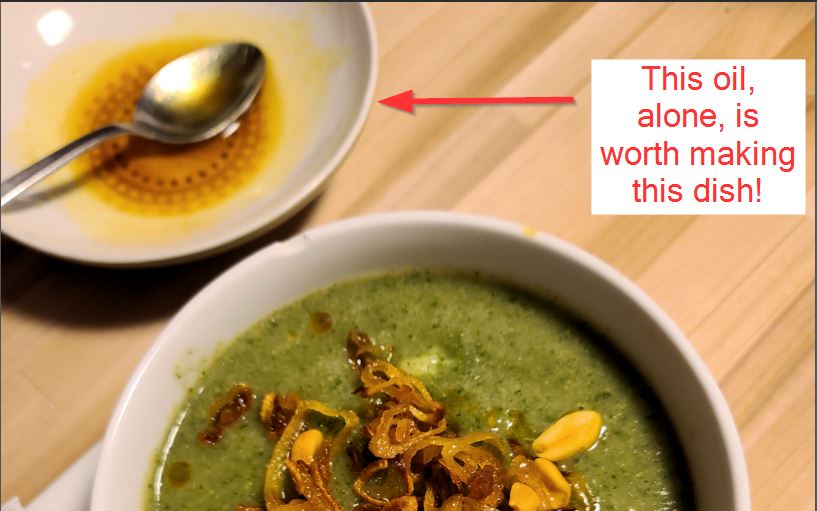 I’m not sure why the recipe doesn’t say to just cook the vegetables (step 3) in the oil you just made. It says to use regular oil. Why? 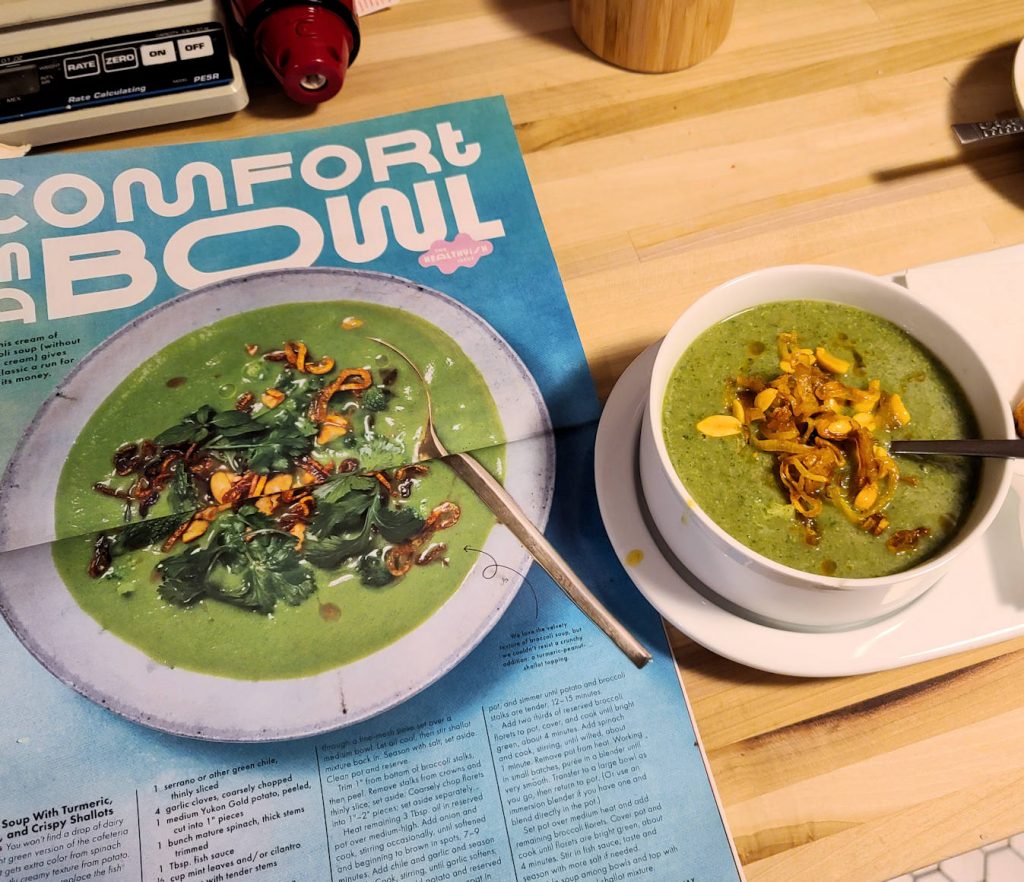 The end result was a good soup. Good, not fantastic. I happily ate my lunch, I also added a slice of toasted bread (we call that toast, Amy). But I never ate the leftovers. I planned to, but each time I saw it in the fridge I went, “ehhhh…” and chose something else. So I guess I didn’t like it that much. 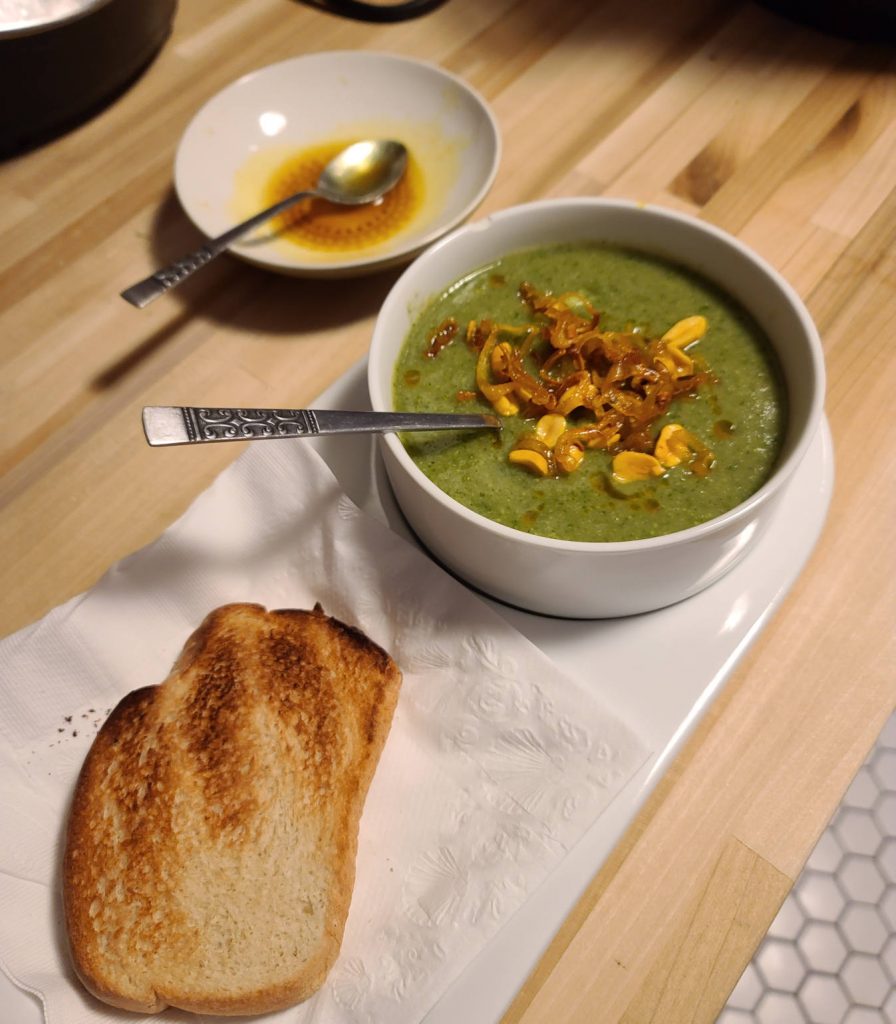 But it sure is pretty!